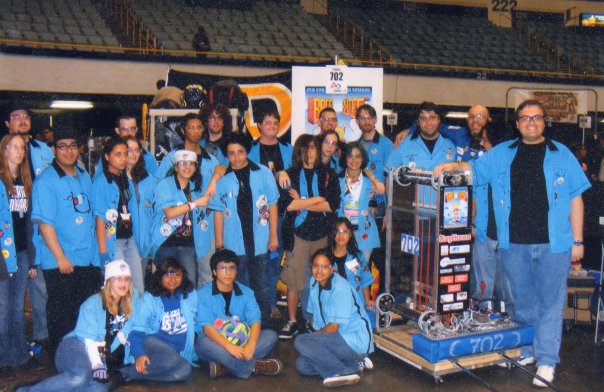 The Students, Mentors, and Coach at 2009 Los Angeles Regional, with the robot “The 18-Wheeler”

In the 2009 game, LUNACY® , robots are designed to pick up 9″ game balls and score them in trailers hitched to their opponents’ robots for points during a 2 minute and 15 second match. Additional points are awarded for scoring a special game ball, the Super Cell, in the opponents’ trailers during the last 20 seconds of the match. “LUNACY” is played on a low-friction floor, which means teams must contend with the laws of physics.

Robots collect spindley balls called moon rocks and try to put them in the opposing alliance trailers. 2 points for each moonrock or empty cell in an opponent’s trailer.

A special “empty cell” colored ball may be fed to the robot from one of the mid field human player stations. If the robot delivers it to the human player at one of the ends of the field, it may be exchanged for a supercell in the last 20 seconds of the match, which is worth 15 points if it is scored.

There was no bonus for autonomous scoring. However, Robots are lined up in front of an opposing alliance’s human player station so if it did not move, the human player could score on them freely. Therefore most robots used dodging strategies in their autonomous mode.

(10 pts each)Human Player throwing moonrocks around the side of the wall, Robots throwing moonrocks over the wall, Empty cells entering play any way other than through the hole in the middle human player stations or being put into play after being exchanged for supercells, Touching the supercell early or without having an empty cell (2 penalties), Descoring a ball. Note: there are no Pinning penalties in this game.